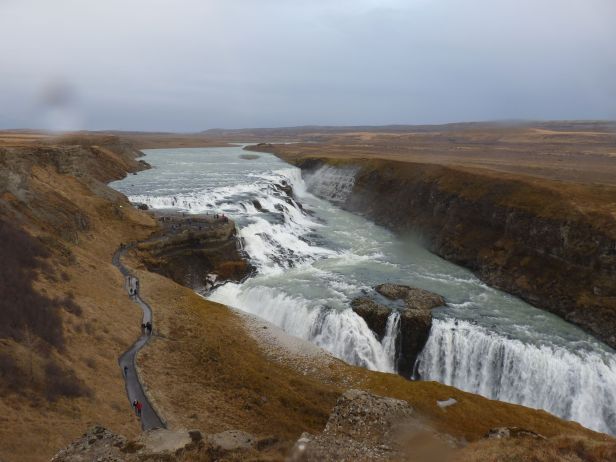 Iceland! Its windswept primordial landscape seems to melt under fast moving skies. At the famous Sigridarstigur site, the river crashes down into one fault line and bubbles up again to rush down the canyon in the distance. The wind is fierce and drops of rain run across our faces. 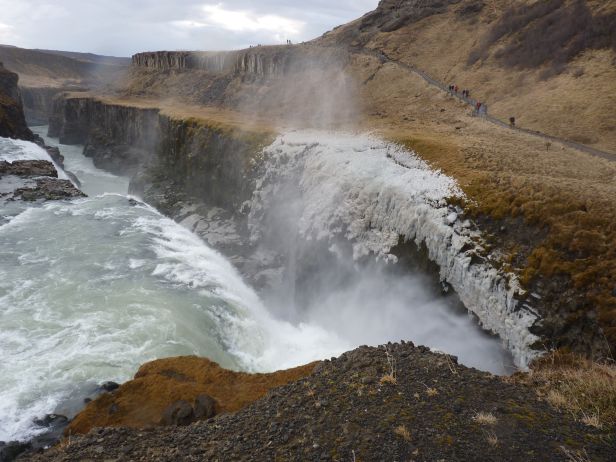 Like a huge mouth the landscape gulps down the water as it disappears over the edge. Iceland’s glacier run off constantly forms into rivulets, streams, rivers and then quickly flows down to the sea.

The whole, small continent sits on the edge of major tectonic plates between North America and Europe which are literally drifting apart one inch each year. Huge cracks in the molten rock landscape spread apart to accommodate the ever-expanding crust of the earth.

If this isn’t enough action, sometimes lava comes up from the ground and continues to layer the land mass. The last volcano blew off its lid and the ash in the air shut down air traffic as far away as central Europe only a few years ago. 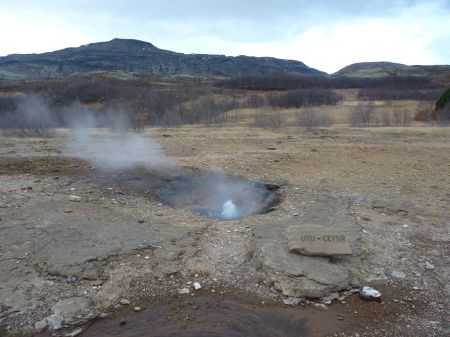 Steam erupts from large and small geysers and billows of wispy cloud drift along over the surface of the ground. Be careful where you trod or you may boil a foot or two!

This geo-thermal underground water supply is a great national resource and put to good use in heating homes and commercial buildings alike. Iceland is the only place I know of where the hot water out of the tap is too hot! In fact, they have to add cold water to safely distribute it.

Hiking trails lead you around the area with signs of volcanic action and steaming ponds. Wind sweeps against you in steady pressure.

In this landscape, you expect to see Woolly Mammoths pounding down through the valleys! But the Icelanders have domesticated their habitat, rearing sheep and hardy Shetland-like horses.

The Blue Lagoon hot springs is a favourite tourist destination in the fading light of winter and the blazing twenty-hour days of summer sun.

But this day was a cool grey one and we just had to join all the others in the water already. Hot turquoise milky-white water, steam, and surreal scenes made it look like we were on another planet! We spent all day here and it was so relaxing to soak ourselves beneath the water while smearing our faces in white silica mineral mud.

A third of the Iceland’s 325,000 population live in the capital. In this city, people dress fashionably for the cold weather. Smart clothing shops highlight artful and original designs. The many fur coats and fur-trimmed collars don’t need an excuse for their display in this climate. I almost bought a beautiful red fox stole with amazing marble eyes in a second hand store for only $39.00. His pointed little nose had a lower clip to clasp its tail once I wrapped him around me. I could have rescued it there from the bin, but what would I do with him when I got home?

In Reykjavik, the capital, the night sky is enhanced by one of the world’s finest revolving restaurants sitting like a spaceport over six huge water towers.

The inside is breathtaking with simple elegant lines with tiers of landings. We enjoy a simple buffet overlooking the city lights below. The we spend the evening wandering around the streets, enjoying the sights and shops and all the other tourists doing the same thing.

Icelanders don’t believe in fairies, but we weren’t sure about their belief in trolls. There seemed to be many stories of their sightings, and ugly creatures they were, for sure! 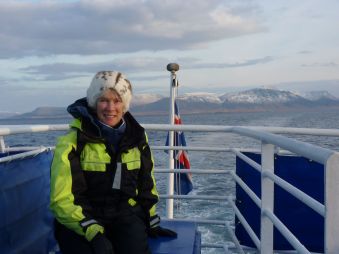 If you want a memorable-something-different kind of destination, I’d go to Iceland. Remember the book called Clan of the Cave Bear? This country is like walking into the reality of that fiction story except it’s real….

PS:  As I write this, we’re on the plane to leave flying west off the coast of Iceland. We cross Greenland which is mostly white, cross the vast expanse of our grand Canada, chasing the setting sun. We watch the vivid red sky on the horizon for 6 long hours. Have you ever seen a sunset for 6 hours? What a fascinating small globe we live on!

• Now what do you think of Iceland? If you’ve been there or have questions, drop us a comment below …

This post is written by the author of The Celestial Proposal: Our Invitation to Join the God Kind. You can review the book and purchase it here: On Amazon.com

One thought on “ICELAND: A WINDSWEPT PRIMORDIAL WONDERLAND”