Have you ever ridden a camel? Well, it wasn’t exactly on my bucket list! But I couldn’t turn down the chance to climb up on one! We were on Lanzarote, off the coast of Morocco, an island like I’ve never seen before….

Lanzarote is one of the Canary Islands. Years ago the harsh environment was cultivated into plots of vegetation with the use of plows pulled by camels. They still don’t look out of place as we ride them up over the barren hillside. Much of the island looks like this. It’s an area of great volcanic activity and the soil is mostly composed of lava broken down into a rainbow of small coloured pebbles. I tried to decide the exact colour of the sky. It was almost a periwinkle shade of blue, vivid against the dull background.

The splayed cloven hoofs of the camels gripped the ground like bare feet as we padded our way along the black track. Mounting dual seats on the saddle was a drama-act in choreography. You can’t look nonchalant, seated like human cargo on these green seats – though we tried!

Did you know that camels have their own unique personality? Some of them are known to spit great distances and nip you if they feel like it, hence the headgear over their mouth. This one was still pet-able with his kinky fur coat, and his inch-and-a half-long eyelashes had me envious! 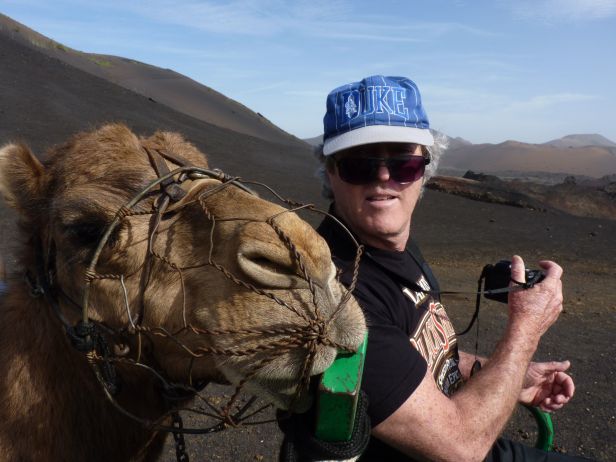 Later we travelled up closer to the active volcano area. But then maybe we were transported into another realm because these empty cones rising up out of the ground didn’t look like we were on planet Earth anymore. In the far distance out of the haze came the blue of the ocean. 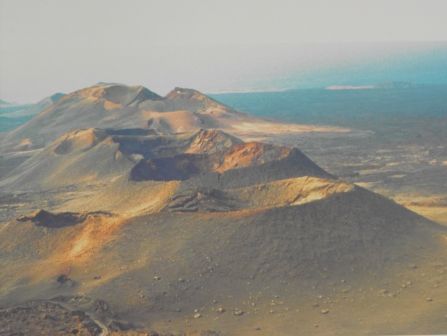 On the top of one of these volcano rims sat a really neat restaurant. Outside we stood over an open fissure in the ground and watched giant-fingered flames reach up and grab pitchforks of sage brush held over the opening. A handful of hot pebbles from the side of the pit were placed in our hand but they sure were too hot to hold for long! Near the restaurant, another opening to the underground created an ever-ready, energy-efficient barbecue where savoury chicken and roasted potatoes tantalized our sense of smell.

The people of Lanzarote live at peace with their environment. Their history is riddled with volcanic smoke covering the island for years at a time, but still they returned to this island home of theirs.

In the Okanagan Valley where I come from the vineyards grow profusely, but here in Lanzarote they grow grapes with determined ingenuity! Each plant is set in a black hollow of rich coarse volcanic soil so porous it conserves the moisture of the dew in the morning. Stone barricades are built up around the plants to protect them from the harsh hot winds of the summer months. And there in the womb of inhabitable earth the new vines bud out and reach for the sky. 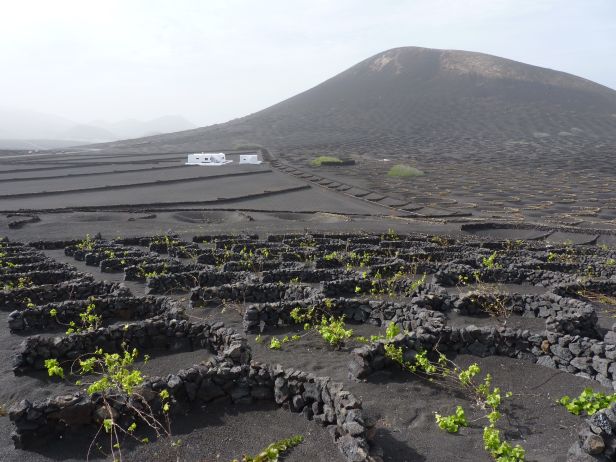 Have you ever seen a more barren place to try to grow living things? Have you traveled to harsh environments, and also found such beauty? Write back and tell us about it in the reply box below. We might want to follow in your footsteps!

P.S. Years ago, my home was one of the last homesteads in the middle of the Canadian wilderness 100 miles from a small town. It was where we raised our children and where I first started writing about finding power in a relationship with God! I really needed to be empowered back then! The isolation and the hardships in that harsh environment made me depend on a source of Higher Power. Our large Percheron horses and Highland cattle perfectly fitted those alpine meadows, just like the camels do on Lanzarote. It brought back my own memories of surviving.

From that little ranch on Rozek Creek, I learned that God is everywhere and you can access that source of power anywhere. God even talked directly to me one day…from the pages of a book:

Check out the author’s own book: The Celestial Proposal: Our Invitation to Join the God Kind

You can review it here:  On Amazon.com