Hello from Ephesus! Last October I walked on the Arcadian way, the ancient road on which Paul, the Apostle to the Gentiles, walked up from his ship to Ephesus to begin his three-year stay

I sat on the marble slabs in the middle of a huge amphitheater that held over 3000 people and I swear I could hear the echo of his speeches projected up to the people from the marble floor below. I was so moved that Spirit rose up inside and tears fell down from my cheeks. Sean smiled and hugged me, remembering written parts of my book. 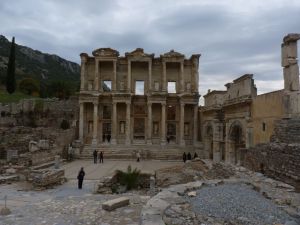 Local history says that the disciple John, known to have been Jesus Christ’s best friend, was buried at St John’s Basilica near Ephesus. Before he was killed, Jesus looked down to John from the cross and asked him to take care of Mary his mother as if she were his own. It was on the outskirts of this important port city of Ephesus that John brought Mary to live out the rest of her life.

Did this virgin, this courageous woman who birthed and raised a half other-worldly child to become a celestial ambassador…did she end her days in peace and prestige?

We visited her house site, long gone, but enshrined on the side of a steep country hillside overlooking the sea. Serene and beautiful was the view, probably much like how she was inside. I think so, for looking out over the sea through the natural vegetation of what seemed to be my well -known pine and maple trees brought me great joy. 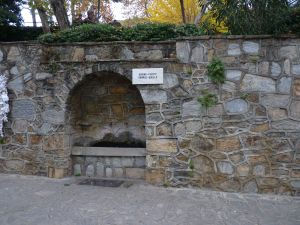 I drank water said to have healing powers from the spring she once used. I had no physical crutches to throw away but there again the tears slipped down.

There is a stone prayer wall covered with perhaps millions of scribbled pieces of paper, napkins, ribbons – anything that could offer a writing surface. People like you and me, pleading for metaphysical help in their life, created this matted carpet, prayers tied to prayers 4 or 5 inches deep hanging on each other for 40 feet along the marble pathway.

My prayers were prayed for all of you who search for beauty and understanding. Although we have seen many magnificent Greek and Roman ruins by now, I have never been moved so much as I am here. Why it was, I can’t explain. An open portal, a celestial connection?

2 thoughts on “HEARING ECHOES AT EPHESUS”